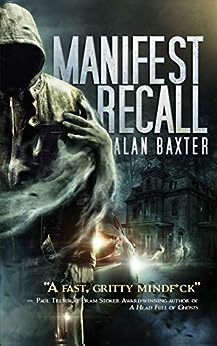 Following a psychotic break, Eli Carver finds himself on the run, behind the wheel of a car that’s not his own, and in the company of a terrified woman he doesn’t know. As layers of ugly truth are peeled back and dark secrets are revealed, the duo find themselves in a struggle for survival when they unravel a mystery that pits them against the most dangerous forces in their lives.

A contemporary southern gothic thriller with frightening supernatural overtones, Alan Baxter’s Manifest Recall explores the tragic life of a hitman who finds himself on the wrong side of his criminal syndicate. Baxter’s adrenaline-fueled approach to storytelling draws readers into Eli Carver’s downward spiral of psychosis and through the darkest realms of lost memories, human…

My god people, the response has been amazing. Thank you so much, you have no idea how grateful I am and how much I appreciate these opportunities.

Im closed for submissions at the moment, give me a chance to catch up and get some great books promoted.

Thank you you again guys, from the bottom of my heart I appreciate it.

I am back on track and back open guys – hit me!!

Got plenty of review to come this month. Looking forward to lot’s of reading and writing (and some Halloween fun).

The Five Senses of Horror by Eric J. Guignard & Co

I am currently closed for submissions until I catch up with my current list.

Thank you so much for your patience and support 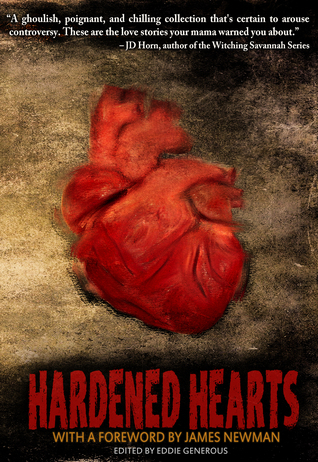 Hardened Hearts is an interesting collection of 17 short stories from various authors, concerning the darker and some cases more sinister side of love.

I received this book in exchange for an honest review courtesy of Theresa Braun via @BookTasters (Twitter). My thoughts and opinions are my own.

Synopsis: “17 stories of difficult love, broken hearts, lost hope, and discarded truths. Love brings pain, vulnerability, and demands of revenge. Hardened Hearts spills the sum of darkness and light concerning the measures of love; including works from Meg Elison, author of The Book of the Unnamed Midwife (Winner of the Philip K. Dick Award), Tom Deady, author of Haven (Winner of the Bram Stoker award for Superior Achievement in a First Novel), Gwendolyn Kiste, author of And Her Smile Will Untether the Universe and Pretty Marys All in a Row, and many more.
Hardened Hearts dips from speculative, horror, science fiction, fantasy, into literary and then out of the classifiable and into the waters of unpinned genres, but pure entertainment nonetheless.”

‘It’s my Party and I’ll Cry if I Want to’ by J.L. Knight was a particular favorite from the collection. Very short, but it was very to the point. This is a tale of heartbreak, loss, and distress delving into madness from the death of his wife. The image of him sitting in the closet for days, with nothing except a balloon she had gave breath to before she passed, with a scribbled woman’s face on it. I found this both quite heartbreaking and extremely disturbing.

I was also very fond of Calvin Demmer’s ‘What is Love’. To me this was a tale of obsession, a story that ended with the frightening “If I can’t have you then no one can” feel. I have one of Calvin’s novels to read, and after this little taste I am quite excited for ‘The Sea was a Fair Master’.

I hate to say that I wasn’t very keen on the opener, ’40 Ways to Leave your Monster Lover’ by Gwendolyn Kiste. I felt in some ways like I was reading a bad instruction manual. It didn’t feel like a story, short or otherwise. I must admit, having this as the opener did put me off a little. I hoped, and was pleased to say, not all the tales were as off putting.

There is something for everyone here, whatever your favorite style of writing; there will be something to suit your taste. I loved some, liked some, and disliked a few. Overall I feel this is a good read, it’s interesting and each story can unleash a different take from everyone who reads it.

Lesley-Ann (The Housewife of Horror)

The Siren and the Specter

I received this book courtesy of NetGalley and Flame Tree Press in exchange for an honest review. My thoughts and opinions are my own.

This book has had a lot of love over social media and various book review sites; it has popped up on my news feed time and again with its 4 and 5 star reviews and I’ve seen numerous posts about how scary and terrifying it was, and I admit I was very excited to receive it in exchange for a review. I was a little late to the party with this, but thankfully it was still available to request via NetGalley.

Synopsis: “When David Caine, a celebrated skeptic of the supernatural, is invited by an old friend to spend a month in “the most haunted house in Virginia,” he believes the case will be like any other. But the Alexander House is different. Built by a 1700s land baron to contain the madness and depravity of his eldest son, the house is plagued by shadows of the past and the lingering taint of bloodshed. David is haunted, as well. For twenty-two years ago, he turned away the woman he loved, and she took her life in sorrow. And David suspects she’s followed him to the Alexander House.”

I enjoyed it, I really did, although I personally didn’t find it scary. From reviews I have read and various posts I have seen in relation to it, I had expected to be shaken to my very core by this one. To me it was a great story no doubt, with an eclectic mix of characters, ranging from the sweet, the decent, to the downright seedy. I found the majority of characters interesting; I became very fond of the lead protagonist, David Caine, as well as growing to love Jessica as the story developed.

Two characters I had problems with were Mr Templeton, the caretaker of Alexander House, and his daughter Alicia. To me, they felt to be ‘filler’; they seemed to serve only a gratuitous purpose. The discovery of Alicia’s severed head seemed to be inserted only for shock value and then her father who responds in anguish was a bit of a ‘blink and you miss him’ character, brought in to pad the scene out. One minute he was trying to kill David and Ralph, the next he was helping them escape the house. This was the one part of the book that felt a little messy to me, a tad pointless. Alicia’s character hadn’t been developed enough for me really to be bothered by her grim demise, it felt more like she was just introduced so she could be killed.

I wish more had been done with Ralph’s character. After the revelation of what he had done, or more accurately, what he had allowed to be done, I really wished that his story had been allowed to develop a little more. I would have loved to see a bit more before his confession, and a lot more after. I think he was a decent guy overall, he had just made a bad decision to get through life – don’t we all sometimes? We all have regrets, dark secrets that we want to stay hidden, sins we wish we could undo. A part of me wished that he hadn’t have been killed the way he was, but again, it developed the story somewhat with regards to David and the undoing of his perpetual scepticism,so I can see why it was played out in such a way.

I really enjoyed the seedy Shelby family, Honey… oh dear lord, what a nightmare of a woman. Her bullish husband and her two innocent children, it was heartbreaking at times. Especially Ivy – the poor girl endured a lot. I really liked David’s interaction with them, the inner monologue of deciding what to do, should he go to the police or not. It really fitted well with the sad times we live in, with this kind of family unit being everywhere. The sad truth nowadays is you find yourself torn, you might want to help, take a child in and feed them, make them feel safe for a little bit, but you can’t. We now live in a world where if you so much as smile at a child you can be accused of all kinds. I have even read ridiculous news stories where a father was arrested for taking a picture of his own child in a park. We have created this madness, this world where we are all too scared of accusation and repercussion, to help people now. I appreciated that it was alluded to within the book, intentionally or otherwise.

The Siren aspect of the story is another part that I feel wasn’t touched enough on. We only receive a brief synopsis of this during the book, and it felt a little like a Marvel post credit scene at the end.

Overall I very much enjoyed The Siren and the Specter.  I have several issues with it, but with that, it’s a great story. It is about love and loss, as well as the sad truths of some families and the twisted way friendships can end up. It didn’t feel like a great ghost story, and I was definitely more interested and involved with the characters and the developing plot, rather than with the haunting, which just felt more like a secondary side story.

It’s a fantastic read despite what I found to be flaws.  It’s interesting and thought provoking and does have a few horrifying moments near the end.

3/5 – not terribly scary but a great story nonetheless.

I’m so grateful to have been given the chance to read these lovelies, thank you Flame Tree Press.

I look forward to reading and getting my reviews up over the next few weeks.