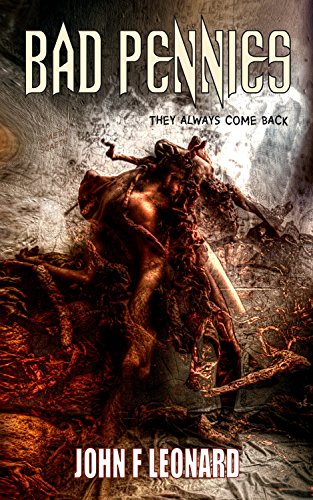 Chris Carlisle is about to experience an everyday horror. A morning that starts out bad is going to get infinitely worse. It’s gonna go to hell.
Wrong place at the wrong time and life takes a wrong turn.
But even the blackest clouds have silver linings. He’s going to get a little slice of luck to balance out the horror.
Just goes to show, bad often comes bundled with good.
Sometimes, they bleed into each other until you can’t tell them apart.

That’s where the strangeness begins, when the miraculous starts to rub shoulders with the mundane and monstrous.

It is only the beginning…
Chris has stepped onto a long road that leads to a hideous and horrifying destination. Dark and dangerous stops are dotted along the way. The pavement is crumbling and craziness shining through the cracks.
Enough for him to question his sanity and come to the conclusion that madness may be the easiest way out.
Sometimes need and greed get mixed into a deadly and deceptive cocktail.

He’s going to discover that dark and dreadful things lurk within spitting distance of the ordinary and routine.
That there are levels of horror and layers of knowledge which defy any rational explanation.
Impossible creatures crawl along the shady seams of the world.
Monsters wait in the shadows.
The walls of reality are thinner than we know. In places, they’ve been hollowed to a hazy veil that struggles to hold back the horror of what lies on the other side.

Chris is going to get a glimpse of an eternal darkness.
Become acquainted with a supernatural hunger that has endured aeons and echoes down the ages.

HE’S GOING TO ENCOUNTER THE SCAETH. A CREATURE THAT IS OLDER THAN TIME AND TWICE AS MERCILESS.

Chris thought life was grim. He has no idea.
He thought he was hard up. He doesn’t know what debt is.
They say that money is the root of all evil. They also say that the bad penny always turns up. That’s so true. Those crappy coins have a nasty habit of coming back.

BAD PENNIES is the first book of the SCAETH MYTHOS, a terrifying vision of horror that will haunt your dreams.”

The first thing that really grabbed my attention with this book was Chris Carlisle. A guy, just trying to make it through life, struggling the same way we all do. Mundane job, living payday to payday, debating with himself over the now regular winter ‘heating or eating’ dilemma. This is a great story, a supernatural horror story encompassing not only the horrors of the supernatural world, but also the horrors of our own everyday existence. I felt his internal struggle, his guilt, and his overwhelming need. He needed the money, he knew he was wrong, but it was going to help him more than the dead guy wasn’t it? Or so he thought. I really loved the undertones about our general money worries, and the depths we can be driven to in desperation. For me personally, it felt like John F. Leonard was getting right into the nitty gritty of our materialistic society. The rich get richer and the poor get squashed.  Our ‘need’ as it were, for the things we don’t really need, take over our senses and cause us to do things completely out of character, ruining our lives and those of our loved ones. Those of us who are desperate enough can be completely blinded by obsession and greed. To me, this was a story examining just how far one is willing to go, and how much is one prepared to turn a blind eye to, just to get on in this mundane existence we have created for ourselves.

A particular quote I loved “I might have no time for Fleecebook and Twitter-Tattle, Snapshat or Instawhatever, but it loves them like naughty sons. The more noise the better as long it keeps a few real truths quiet.”

I felt this partly summed it up, our materialistic obsession. We love sharing so much with friends via social media. We lose ourselves in the moment, rather than enjoying what is in front of us right now, we sacrifice it for a few likes and retweets. We are missing so much. I am as guilty as the rest for this. There is a pressure here too, the ‘keeping up with the Jones’’, the need to acquire things just to show we have them. We don’t like the idea of people knowing we are struggling, we don’t always ask for help when we should. It’s like this ‘shame’ has been bred into us. There is no shame in needing help. To me anyways, it felt like this was one of the points of the books. Speak to people, ask for help if you need it. Don’t leave it so the ‘help’ seeks you out. Evil is attracted to the most vulnerable among us.

My favourite character has to be Ronald Hodge. My god that guy is a creep. I felt like I needed a shower each time he was in a chapter. He is one horrendously bad man, in every possible way. I absolutely loved the development of his story. The way it just kept getting worse and worse (in a very good way), he is awful. Reading about Steph in his house gave me chills. It was so bad yet so good. I really don’t want to say too much on Ronald as I don’t want to totally ruin it for people. This is must read, for this character if nothing else.

Bad Pennies is brilliantly thought out and written, it flows so easily from one chapter to the next. The switch up in characters is obvious without being confusing. The fluidity of the story and realness of all the characters made this a truly horrifying pleasure to read.

I am very much excited to delve deeper into The Scaeth Mythos, it’s fascinating. The other realm, the manipulations of our reality and the descriptions of the, do I call them familiars? I’m not sure. King Ratty was a definite favourite. When he became spider-rat, oh god, I was itching all over. I hate spiders! I really can’t wait to read the next instalment.

Anyway, that is more than enough from me raving about how much I loved this book.