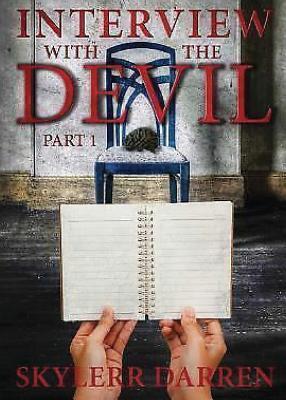 “There sat a frail, abnormally-pallid African-American man. His weight looked rather questionable. He looked as if he hadn’t eaten in months, judging by the fact that his integral skeleton had been visible through his diminished skin. He stared at me with no facial expression. He just sat there, staring.”

Satan, the brooding, scriptural ghoul that takes on the responsibility for murder, perversion, and the gruesome deaths of children. Society views these horrors as a grim nightmare-a nightmare in which one would desperately attempt to wake up from. But in reality, you simply just can’t wake up from a nightmare, for both reality and fiction have become one. Victor, a timid young college student dreadfully awakens into such a demonic ordeal from the repulsive dismiss of his relatives, to macabre dreams and morbid occurrences. Do not look at Interview with The Devil: Part 1 as a mere book but instead the detour into your own self-morality.

There are honestly no words, this is awful. It’s full of rape, suicide, dead babies sexually abusing their dead fathers (I know, right)… and for what? It’s pointless. I am by no means easily disturbed, or a prude, or any of that, but there was honestly no need for this. The descriptive text was too much, very over the top, graphic for nothing other than shock value. There was no plot development within all this gratuitous trash that I could make out. Yet it started so well on the first few pages, I really thought it was going somewhere good.

I really don’t have anything else to say about this, it’s bad… it’s really bad.